On February 13th, the Santa Ana Observatory put on the first ever One Love Cali Reggae Festival. This festival included over 27 bands and artists 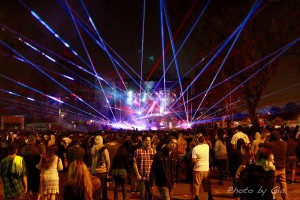 on three different stages, two inside The Observatory, and one main stage outside where the parking lot usually would be. This was one of the first festivals The Observatory has hosted and it was sold out weeks before the day of the event. The overwhelming masses of people and    cars as well as unorganized directions made parking more difficult than usual and getting from stage to stage to see the bands playing closely after one another was almost impossible. The impressive lineup made for a hectic but beautiful day of conscious music.

We started off the day by catching part of Perro Bravo’s set on The Constellation stage. This band was a

co-founder of Skunk Records and often played side-by-side with the original Sublime. Their music definitely had a Sublime vibe that filled the room as they jammed: a great way to set the tone for the rest of the day.

After making our way to the main stage, the next band we caught was Fortunate Youth. Every time I see this band, they have the crowd singing and

dancing to every song, leaving them anticipating which hit they will play next by the end of each song. Speaking of hits, Fortunate Youth is never shy when it comes to lighting up a joint on stage and at this particular show, they had one lit almost the whole time. Fortunate also showed love to Seedless, the band who performed just before them, by having their lead singer, Mathew Liufau, join them on stage for the song “Jah Music”, a track he is featured on.

Next on the main stage was a personal favorite, Stick Figure. Considering the vibe at the entire festival felt quite chaotic, Stick Figure did a perfect job of easing some tension and setting a mellow mood within the crowd. They also surprised the crowd by having TJ O’Neil accompany them on stage for their hit song, “Weight of Sound”. Stick Figure definitely never fails at putting “smiles on faces”.

Unfortunately, because many of the bands were playing on different stages at the same time, some tough decisions had to be made. I passed up seeing Tribal Seeds and Pepper on the main stage, two bands that never disappoint, to see Ital Vibes and Iya Terra in The Constell 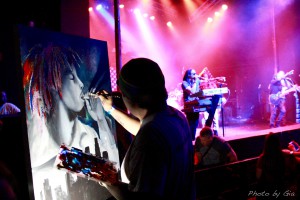 ation room. This was a decision well-made. These two bands go hand-in-hand; both bands involved with Rude Entertainment Productions and both working hard to spread positive messages to the masses. This was my first time seeing Ital Vibes and I was impressed how they had the crowd dancing on their feet the whole time and engaged in the performance. I will definitely be looking forward to catching them again soon. This was about my 10th time seeing Iya Terra and it was easily the best performance I have seen by them yet. The energy was high the entire time and their collaborations with Kennedy from Ital Vibes on their song “Bless Up”, and with New Kingston on their song “Real Sensi”, had the crowd going insane. Also, look out for their new single, “Loving Design”, set to be released on March 2nd.

Finally, it was time for the festival headliner and most awaited performance of the day, Rebelution. It felt like Rebelution really stepped up their g 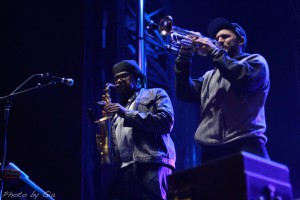 ame for this festival. They opened their set with the soundtrack from Star Wars that needless to say, had the audience even more eager for their performance. Khris Royal on the sax and Zach Meyerowitz on the trumpet were the first ones on s

tage creating a dramatic entrance with the sounds of their horns. The other members joined shortly after and the rest of the performance was just as on point. Rebelution has become one of the most mainstream reggae bands and is continuously contributing to bringing more fans into this growing genre of music.

Yellowman and Barrington Levy hosted the after party on the Observatory stage and both kept the energy going until 1:30AM, props to anyone who made it that late. It was difficult to see even half of the band 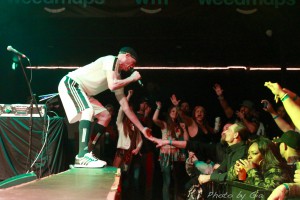 s on the packed line-up considering it was not easy to get around the venue due to tickets being oversold and the venue didn’t quite seem prepared for such a turn out. However, it was a blessing to be surrounded by so many talented bands and I hope they plan another One Love Cali Reggae Festival for next year, but this time just at a different venue.